In March 1920, Grant Smith was accused of assaulting Ruby Anderson, who was the daughter of a wealthy, prominent farmer.  Grant was taken to jail by Deputy Sheriff Powell.  The Lexington Herald reported that Judge C.W. Fulton was anxious about a gathering mob who might try to interfere with the transfer and trial of Smith.  Judge Fulton wrote Sheriff Powell a letter, instructing him to escort Smith from jail in the evening and out of the view of the mon. But, in the process of transferring Grant, the mob intercepted the police, affirming the worries of the judge.  The mob took Grant from police custody, wired his arms to his side, and lynched him on a telephone pole between Blue Lick Springs, Kentucky and Mayslick, Kentucky.  According to news reports, witnesses said that Smith lived for about 15 minutes after being hanged. Smith’s body was found on the telephone pole, his hands still in handcuffs.

The lynching of Grant Smith also emphasizes the role newspapers and other forms of public media played in stirring up public outrage and promoting beliefs about black criminality. A few days before the lynching, one newspaper, the Kentucky Post and Times-Star, reported that Grant claimed he was innocent of the charges and that there was a $500 reward for his arrest or capture.  A few days after the lynching, many newspapers reported the same story (listed on this site), in which Grant confessed twice to assaulting the girl.  One newspaper, the Maysville Public Ledger, printed both stories, one of Grant’s confession and one of Grant’s declaration of innocence. The kidnapping and hanging of Grant took place before he was ever brought to trial. 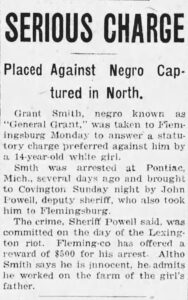 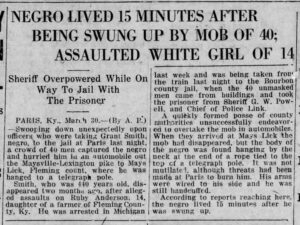