Henry “Fratus” Warfield was born in Kentucky in 1879.  When he was a boy, he resided in Hadensville, Todd County, Kentucky with his mother, Mary Warfield, who was born in Kentucky, and his father Squire Warfield, who was also born in Kentucky.  Todd County, Kentucky is located in southwest Kentucky along the border between Tennessee and Kentucky.  His mother was 24 years old and his father was 26 years old at the time of his birth.  Also residing in their household was a younger sister of Fratus, who was born in May 1880, and had not yet been named at the time of the 1880 census.  Mary and Squire Fratus were also able to read and write.  In the census, occupations for those in the household were not listed, but those living in their neighborhood were all occupied as farm laborers.

In October 1900, Fratus Warfield was accused of attempting to frighten the wife and child of a prominent white farmer into letting him into their house while the farmer was not at home.  Newspaper headlines accused Fratus Warfield of assault, though the stories only discuss an attempt to frighten.  Upon this accusation, Fratus Warfield was taken to the Todd County Jail.  On October 18, 1900, a mob arrived at the jail, and demanded that Fratus be released into their custody. The  jailer complied with their demands.  The mob then took Fratus about a mile down the road from the jail and hanged him from a tree limb.  His body was left there overnight.

When the coroner arrived the next day the coroner arrived, a crowd gathered to view his body the following morning. A jury was selected at this time, and it concluded that Fratus Warfield’s death was “at the hands of an unknown party or parties by hanging.” The newspaper accounts do not reveal who was arrested or prosecuted for the crime. 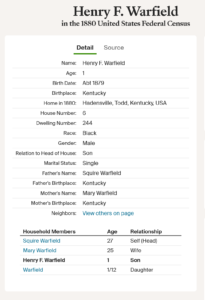 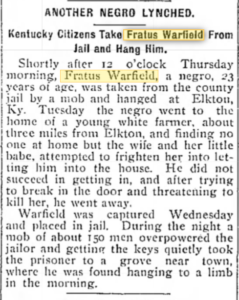