There is no extent information about the birth, education, labor, or residence of Wick Willis.  Information about the lynching Willis is derived from newspaper articles about the killing. Newspaper accounts from 1892 used racially biased language to describe Willis, presupposing his guilt when there was no evidence presented that an attack occurred.

In late May 1892, three white men accused Willis of the attempted rape of Miss Ella Dice. Fearing a lynch mob the police arrested Willis and took him to jail in neighboring Taylor County. Just shortly after midnight on May 31 1892, six to twenty men from Adair County approached the Taylor county jail. According to the Louisville Courier Journal, the town jailer was coerced into opening the door of the jail by the mob. But the Hopkinsville Kentuckian claims he gave up Wick Willis “with no resistance.”  The Courier Journal described a large laceration to Willis’ forehead that was sustained during an escape attempt.

Willis was taken from the Taylor County jail in the early morning hours of June 1 1892. The Owensboro Messenger describes Willis’ last moments in just one sentence, “The intention of the mob was to hang him at Columbia, but daylight coming on them, they were forced to hang him just where they did.” A subsequent passage describes the town the day after the lynching as being quiet and normal in nature. 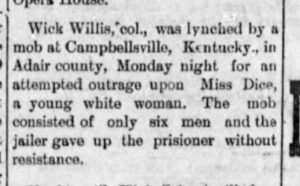