William Clifford, also known as W.M. Clifford or Will Clifford, was a farmhand and laborer from Zanesville, Muskingum County, Ohio. Born to Mary and John in February of 1867, Clifford had up to five siblings. By the year 1900 he was the only child living at home, he was 33 years of age. The following year in 1901, his mother, Mary Clifford passed away, she was 76. It is possible that William’s had a close relationship with his mother, as he left Zanesville soon after her death. Sometime following this, before 1907, William Clifford left his home and took up residence in Tiptonville, Tennessee. Clifford had no record of being married or having children. William would be accused and admit to the rape and murder of a woman in 1907, leading to his death. During his arrest he admitted to at least one other murder of a female, implying that this had been a pattern for him since his move to Tennessee. Though William was lynched in Hickman County Kentucky in 1907, there is no record indicating that he even took up residence in Kentucky.

In August of 1907, William Clifford was arrested in Tiptonville, Tennessee, and confessed to the assault, rape, and murder of a white woman by the name of Mary Cowan, as well as the murder of an unidentified woman in the prior year. Clifford had allegedly beaten, raped, and killed Cowan, and thrown her body into a river, due to the location of Tiptonville, this was probably the Mississippi River or an immediate tributary. Clifford was arrested by Constable Burrus and taken to the Lake County (Tennessee) jailhouse. Constable Burrus received several requests and threats from locals to release Clifford into their control, all of which were denied. However, Burrus felt that the situation was growing more dire, and believed that Clifford would need to be moved immediately to be tried in Kentucky. Burrus took Clifford discreetly from his cell and moved him across the border into Kentucky. He then instructed one of his deputies to allow the mob into the jail, so as to convince them that Clifford was gone and that they may disperse. On the sixteenth of August, the mob noticed Clifford’s absence from the jail, and unlike Burrus had suspected, tracked Burrus and Clifford to a barn in Mabel, Kentucky. Burrus and Clifford found themselves trapped, and Burrus handed over Clifford to the mob. Local authorities stated that the mob had dissipated and Clifford’s body was the only evidence present. Once Clifford was hanged, it was reported that there was only one other black resident in Tiptonville at the time, leading to belief that this crime was motivated by racial tensions in the community. 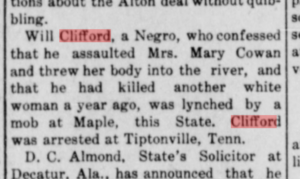 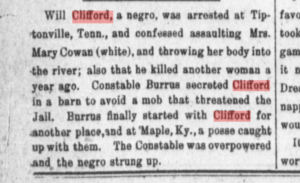 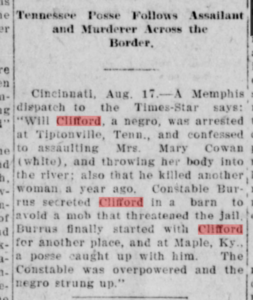 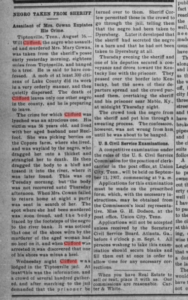