Born in March 1896, Arthur Bell was the fourth of four children of William and Francis Bell.  Arthur had a younger brother, John, and two older step-siblings, Robert Brown and Cora Brown.   According to the 1900 census records, the Bell family lived in Cheatham, Tennessee.  William Bell worked as a farm laborer and Francis Bell took care of the home and children. The census recorded that William Bell could not read or write, but he owned his home outright. Francis Bell could read, and likely was responsible for the education of her children. In 1915, Arthur Bell was living in Clarkville, TN.  His occupation and other details of his life are not known.

On Saturday, May 29, 1915, Arthur Bell was arrested in Hopskinsville, Kentucky on the charge of burglary.  According to the Hopkinsville Kentuckian, on Friday, May 28, the home of Kelsey Cummins was broken into and “$60 worth of clothing and gold watch was taken.  Though no one witnessed Bell breaking into the Cummins’ home or saw him with the stolen goods, Bell, an African American man, was seen in the predominantly white neighborhood and was arrested.  Most of the stolen items were recovered.

The sheriff transferred Bell from Hopskinsville to Princeton, Kentucky, in Caldwell County, on Sunday, May 30. While in Princeton, Kentucky, B. Brandon, a white woman, claimed that Bell had attempted to assault her. Accompanied by her brother, Brandon went to the jail where Bell was being held and demanded to see him.  She told the sheriff that Bell tried to attack her also on Friday, May 28. No charge was filed or a warrant issued for the arrest.

On June 4 in Princeton, a mob of masked men appeared outside the jail in Princeton, demanding that Jailer Throckmorton turn Bell over to them.  The jailer complied.  The mob dragged Bell from the cell, and hung him from a walnut tree. The Earlington Bee reported that the mob escaped before they were arrested. The Hartford Republican stated that, after a search of two to three hours, Bell’s body was located and taken to a mortuary for burial. At the time of his death, Bell was 19 years old. The kidnapping and killing of Arthur Bell led the authorities to conceal and relocate other prisoners from the jail. 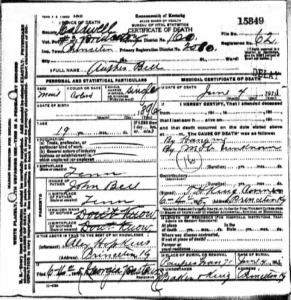 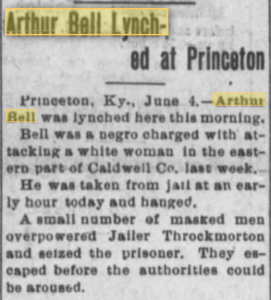 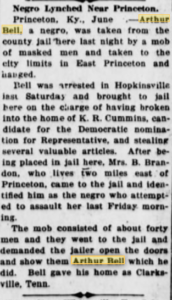 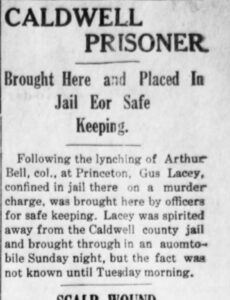 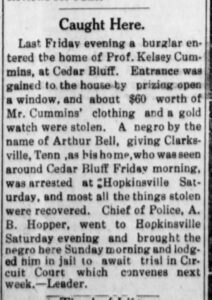