Benjamin “Booker” Brame was born in 1891. There is no extent census or biographical information about his birthplace, his family, or his education.

On April 9, 1909, Brame, who was 18-years-old, was accused of insulting, attempting to assault, or assaulting of a white woman. The exact accusation differs according to the source. Ruth Gee appears in most of the accounts as the focus, but a few newspapers also name Sallie May Gee, Ruth’s younger sister. None of the accounts explain the exact nature of the assault, but all of the newspapers printed the testimony of Sallie May Gee who said that she warded off Brame. (Brame could have stopped to talk to Ruth, or he could have attacked her. This part of the story is not known.) The Gee family, who had claimed that Brame attempted to assault their daughter, gathered a search party and eventually found Brame. The authorities were able to restrain William Gee, who attempted to shoot Brame while he was in custody.

While Brame was in custody, later in the day on April 9, a mob of between two-hundred and three-hundred farmers and locals broke into the jail and kidnapped Brame. They carried Brame to the county line between Trigg and Christian counties and hanged him. Brame’s body was left hanging for an estimated forty-four hours; he was only cut down at the request of the A.M. Henry and Jas. L. Allensworth, the county coroner of Trigg County.

The newspapers at the time used racially prejudicial language to describe Brame. The Owensboro Messenger described Brame as a “fiend.” The Harrisburg (PA) Daily printed that there was “high revel” when Brame’s body was removed from the tree.The effect of using racially biased language was that the newspapers explicitly condoned the lynching. Even after the newspaper printed information casting doubt on the circumstances.

A jury was assembled to identify the body and cause of death, in which they ruled the hanging an illegal lynching. However that the alias’ of the perpetrators were unknown and the case would be closed. Two of the members of the six-person jury were relatives of the Gee family.
According to the Hopkinsville Kentuckian, Brame’s body was photographed and used as a lynching postcard, which was a popular media at the time.  The newspaper reported that photographs were taken of Brame’s body from several points of view. The Lexington Leader wrote that hundreds of people viewed Brame body before the coroner authorized cutting the body down. The Kentuckian also reported that Brame was likely the fifth African American man lynched in Kentucky in 1909. The Harrisburg Daily also reported that many African Americans fled the area after the lynching. 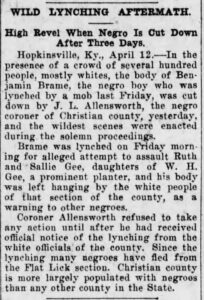 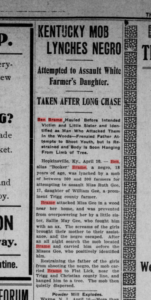 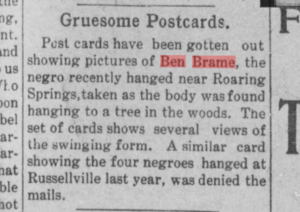 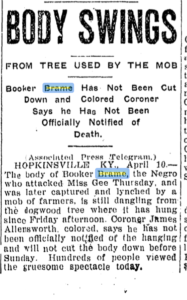