There is little extent biographical information about George Wilson. Contemporary accounts stated that Wilson lived in Carlisle, Kentucky, located in Nicholas County.  One newspaper, the Maysville Evening Bulletin, said that Wilson was a prominent member of the African American community in Carlisle, and he was a member of the Oddfellows Fraternal Order. Another newspaper, the Kentucky Advocate, reported that Wilson was married with four children. The Louisville Courier Journal reported that Wilson was a well-digger. The articles were only a few lines long, and they did not offer further information about Wilson, such as Wilson’s permanent residence, his education, or the names of his wife and children.  George Wright, in his book Racial Violence in Kentucky, listed George Wilson’s death as a possible lynching.

According to several newspaper accounts, Wilson’s body was found on August 14, 1897. Wilson was hanged from a tree and left for dead. An article reported that the police assumed Wilson was murdered by a white mob. His body was found in the woods of Nicholas County, Kentucky. It was also stated that when he was last seen, Wilson had about $60 on his person, but after his body was discovered, he was left with a dollar in his pocket.

In an unusual development. the Maysville Evening Bulletin reported on August 30 that two people were arrested and charged in the murder of George Wilson.  Lulu Willis and Russell Snapp confessed in jail that they hung Wilson to make his killing look like a lynching. The article stated that Lulu Willis said that she and Wilson were lovers.  There were no articles following up on the arrest. 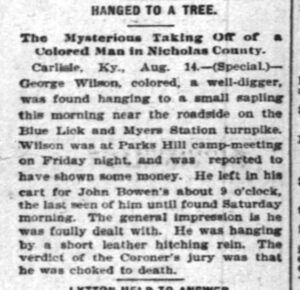 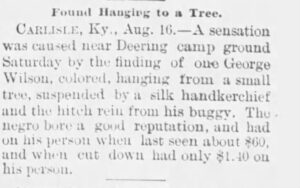 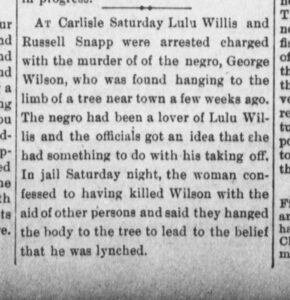 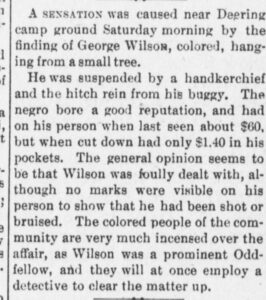 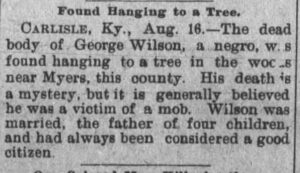