Joseph Richardson was an African American man who lived near Leitchfield in Grayson County, Kentucky.  He was born in 1889 in the state of Tennessee.  He was the son of Joe and Nannie Richardson.  Within their household in Tennessee at the 1900 census, Joe was 11 years old.  He resided with his parents, his sisters Ollie (19), Mary (16), Bessie (14), and Ines (7).  He also lived with Ollie’s husband, James Martin (28), Ollie and James’ daughter Carlister (3 mo.), and his cousin Willie Brown (12).  Joseph’s father was a civil engineer, and all of his children including Joseph were able to read and write.  At the time of his death, he was 24 years old.

According to news reports, on September 25, 1913 Joseph Richardson was accused of attacking Ree Goff, an 11-year-old white girl who was the daughter of a prominent merchant in Leitchfield, while she was on her way to school.  Richardson was held in the Grayson County Jail.  In the early morning hours of September 26, 1913, a mob entered the jail. The Cincinnati Inquirer reported that the mob was so quiet it overtook jailer Robert Jackson by surprise.  He later claimed that the mob tricked him, then gagged and tied him up.  With the jailer’s keys in hand, the mob kidnapped Richardson from his cell, hung him from a telephone pole, then shot at his already deceased body.  After the lynching, someone took photographs of Richardson’s body and converted the images to postcards. The postcards were later distributed around town to convey a “message” of terror to the African American residents.  Richardson’s body hung in the town square for over twenty hours before it was cut down.

Governor James B McCreary refused to acknowledge the lynching, and the coroner concluded that Richardson’s death was, “at the hands of unidentified persons.”  Upon further investigation, it was found that Richardson had not attempted to assault the girl, he had just bumped into her in a drunken state. 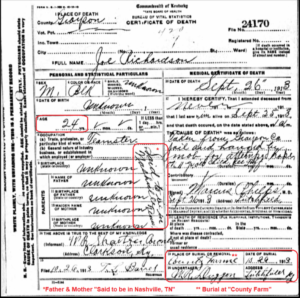 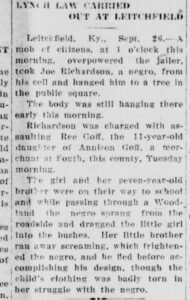 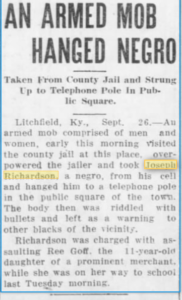 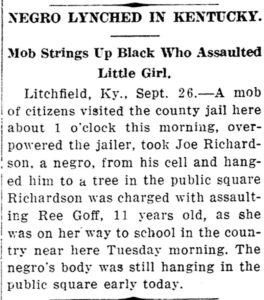