Wallace Miller was a black teenager born in February of 1891 in the state of Kentucky.  He resided in Cadiz, located in Trigg County, Kentucky, with several family members, including his father Bubbard Miller, his mother Della Miller, brothers Rumsy Miller and Robert Miller, sister Lemon Miller, and half-sister Maggie St. Clair.  Also living in the residence was a boarder named Mat Daniel.  The Miller household was located in a primarily black neighborhood.  Bubbard and Rumsy were farm laborers, while Della was a washer and ironer, and Robert was in school.

On August 10, 1909, Wayne and Monte Wadlington accused Miller of attempted assault on their sister, 11 year-old Lula Wadlington, the daughter of prominent farmer Thomas Wadlington. News reports do not identify the girl’s race, but the family was likely white.  Shortly after their accusation, the brothers kidnapped Wallace.  They brought Miller to Mt. Tabor church. At the church, an angry mob of nearly fifty people gathered and took over. The mob dragged Wallace to the church yard, as reported by local newspapers.  The mob first tried to hang Miller  to a tree with a plow line, which he broke in his struggle to escape.  The mob then tied a rein to Wallace Miller’s neck, attaching the other end to a tree limb and placing him on a horse.  The horse was then impelled from under him, leading to his death.  According to news reports, the coroner was sick at the time of Wallace Miller’s death, leading to no inquest into the death being held.  One newspaper, the Hopkinsville Kentuckian, implied that Miller’s lynching was a also signal to the rest of the African Americans in the area, as the newspaper claimed that two white women in the county had been attacked by African American men. The Hopkinsville Kentuckian also identified Miller as a “brute,” and prejudically reported that it was “the negro in [Miller” that compelled him to proposition the girl. Wallace Miller was 18 years old when the mob lynched him. 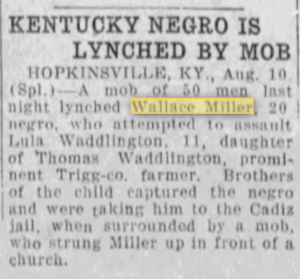 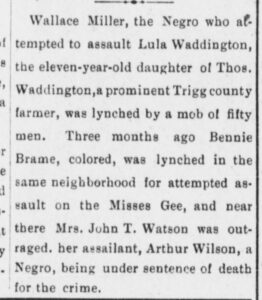 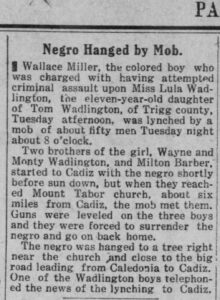