Lawrence Dempsey was born in 1877 in Fulton County, Kentucky. There is no available census data showing his birth month or date, or the name of his parents.

Dempsey first appeared in the newspapers in Fulton County, Kentucky.  The Illinois Central Railroad Company had several railroads going through Western and Central Kentucky, specifically, Fulton County. One newspaper alleged that Lawrence Dempsey repeatedly stabbed Clarence Dublin with a razor. Dublin was an I.C. railroad employee, who was attacked in the Fulton railroad yard. Dempsey was caught in Greenfield, Tennessee, and brought back to Paducah immediately after. When Dublin was attacked, it is believed he lost his hat, coat, and vest; seventeen white civilians swore these belongings were in Dempsey’s possession.

Walter Shupe, the night officer in Fulton county swore that the angry mob broke into the jail quietly. Shupe discovered the jail cell had been broken into and Dempsey was missing at approximately 3:15am on May 20, 1917. The mob strung him to a telephone pole, approximately 3 feet away from the jail. Their identification remains hidden, as no one saw the lynching in place. His body was found by a police officer passing through the area.

Judge Bunk Gardner pledged to prosecute the members of the mob for the lynching, adding “no such outrage could be committed without the guilty parties being prosecuted.” The grand jury was convened to determine if charges should be filed for attempted murder.  A jury of six men found that no one could be held accountable, because “Lawrence Dempsey came to his death by being hanged by the neck by unknown parties, cause of same being unknown.” Dempsey’s body is buried at Fairview Cemetery in Fulton County. 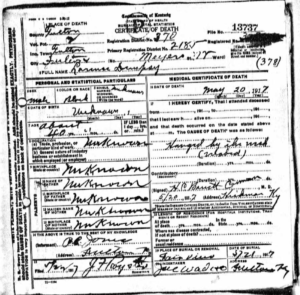 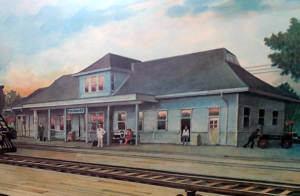 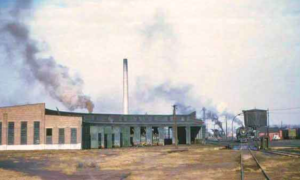 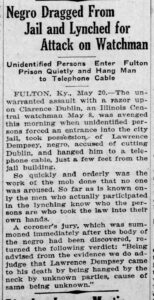 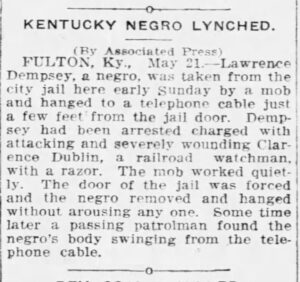 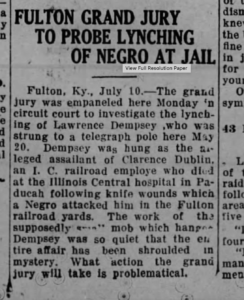 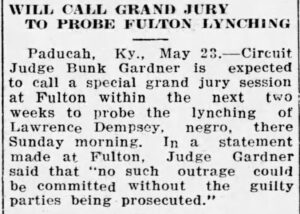