Brack Kinley was born in February of 1886 in McCracken County, Kentucky. Referencing the 1900 Census, he was written as ‘Brook Kinley’ and was 16 years old at the time. He stayed with his uncle Ben Willis and his family. Ben and Hester Willis had Brack’s younger sisters, Lulu and Martha Kinley. He could not read or write, but he could speak English and work as a day laborer.  There is no information to identify Luther Durrett’s date of birth, however, he lived in McCracken County. From his death certificate, he was 32 at the age of the lynching, thereby meaning he was born approximately in 1884.

In October 1916, Brack Kinley was accused of assaulting Mrs. George D. Rose in her home on Pool Road. He was captured by a patrolman and arrested at his girlfriend, Katie Pitman’s home, 1006 Husbands Street. From there, Kinley was taken to the county jail and was later identified by Mrs. Rose. By approximately 7:30pm, a widespread message alarmed the city, and the mob snapped the front doors of the jail apart to grab Kinley. Judge Reed refused to suffice to the mob claiming, “I will not be a party to your mob, gentlemen, and I will say that everyone who participates in this mob will be indicted.” After demanding Kinley’s release from the county jail, they forced him to walk three miles, back to Pool Road and the Rose residence.

After Brack Kinley was kidnapped from Paducah city jail, Luther Durrett confronted the mob carrying a caliber .44 revolver.  He claimed he was going to shoot every white civilian in town. He was captured by the mob and taken to a tree, where the mob strung him up and killed him.

Followed by hundreds in the mob, Kinley was taken into Mrs. Rose’s house. She screamed “Glory to God!” insisting he was the right man. Kinley denied guilt till his dying breath, and was carried to the location where Luther Durrett was already hanged. He was roped and fastened, and the mob hung Kinley next to Durrett’s body.

If the hanging wasn’t enough, several news sources, including the Lexington Herald, reported that the mob and over five thousand spectators riddled both bodies with over two hundred bullets but Mrs. Rose demanded more. She cried, “burn him, burn him, God forgive me if I’ve done anything wrong.” The fire set below them burned their bodies, leaving a pile of bones. The aftermath of smoke streaming from the tree left behind a disgusting and horrific scene.

In late October 1916, a special grand jury was empaneled to try to bring the killers of Kinley and Durrett to justice. The presiding judge, W.M. Reed, declared that the hanging of Durrett and Kinley “was nothing less than plain and inexcusable murder,” according to the Paducah Sun. Judge Reed urged the special grand jury to hold anyone accused of participating in the mob accountable. However, there is no record of any arrest or prosecution of the killers. 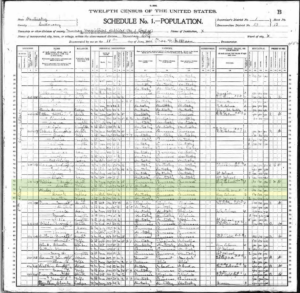 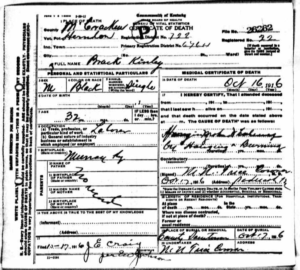 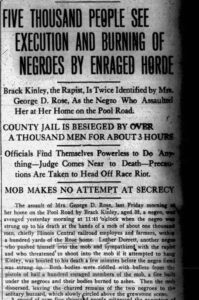 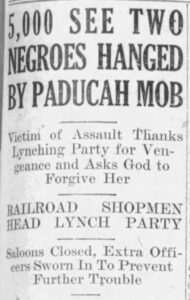 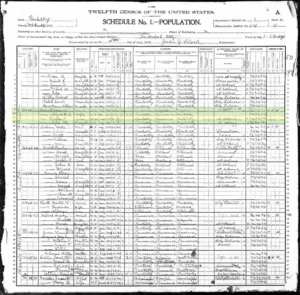 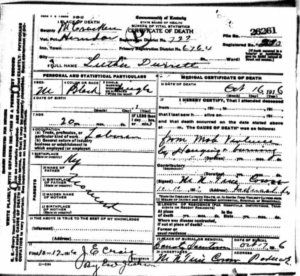