Elmer Hill’s exact birth date is unknown from census records, but due to his death records, it was either in 1880 or 1881. He was born to the parents of Thomas White Wheat and Milley Catherine Hill. The parents bore two daughters as well, Minnie Jane Hill on May 22, 1886, and Mary Belle Hill on April 30, 1889. It’s likely that Elmer Hill was the oldest of the three siblings. It appears that Thomas Hill, Elmer HIll’s father, was hardly in his life at all after the birth of Elemer’s sister Mary.  Thomas Hill had married another woman and none of the Hill children had decided to take their father’s last name. It’s likely that for much of Elmer’s childhood he lived with his grandfather Allison Hill, and worked on his farm with his mother and two sisters. By 1900, Hill had been convicted of his first unknown criminal offense. Some newspapers allege that Hill had been jailed for multiple crimes throughout the 1900s.

The lynching of Elmer Hill stands out because he was one of relatively small number of white men who was kidnapped from jail and lynched by a mob in the 1910s.  Elmer Hill was 27 years old when he was lynched.  On December 16, 1908, the mob took him into the woods to be hanged where Hill made a full confession to the crime.  Hill was a key suspect for the murder of his 10-year old cousin and had run from the law when he received word of this notion. Hill had chosen to hide with some unnamed relatives about 20 miles from Russell County and was successful for about a week. However, after being offered an undisclosed amount of money, his relatives gave him up to the authorities. Hill was taken to a jail in Monticello and the night after being detained a mob from Russell County numbering somewhere between 60 and 70 arrived at the Monticello jail. The jailer felt it was useless to resist and so provided the mob with the keys to Hill’s cell. One paper claims that in Hill’s confession he claimed the only thing he regretted was that he couldn’t treat three other girls in the neighborhood the same way. The mob hanged Elmer Hill and his body was cut down the next morning. 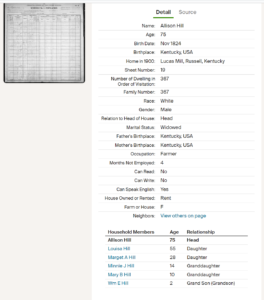 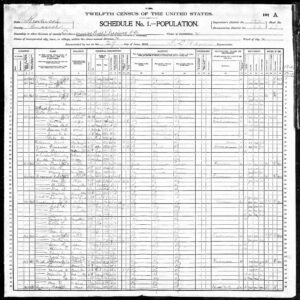 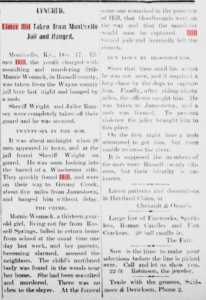 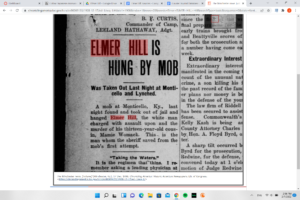 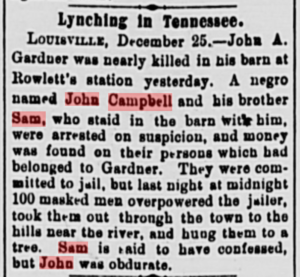