Silas Easter was born approximately in March 1883 in Bonnieville, Kentucky. According to the 1900 census, Silas Easter was the oldest son of H and Little Easter.  Silas had two younger sisters, Elman and Mannie, who were 11 and 10 at the time of 1900 census. In 1901, Easter was approximately 18-years-old and worked as a railroad laborer. He could speak English, which helped his employment while working on the tracks. Please note that the newspaper accounts of the lynching identified Easter as Silas Esters; however, the 1900 census identified the entire family as the Easter family.

The details of the lynching of Easter below are identified as part of an LGBT+ hate crime. These details shed light on the reporting of the lynching, since the newspapers at the time condoned the lynching, citing both Easters’s race and sexual identity.

The Owensboro Messenger-Inquirer stated that Granville Ward, a 15-year-old white boy from Upton alleged Easter forced Ward to commit a sexual molestation crime in Hardin County. After this incident, Esters was captured and taken to Hodgenville to a County Jail. The lynching party went to the jail around 1:30 in the morning on October 31, 1901. This mob was comprised of between 50 to 75 men and led by Granville Ward and his father, Mr. Thomas Ward. Their demand for the jail keys was quickly surrendered by the guard and immediately found Esters’ cell. Entering, they tied the noose around his neck and dragged him down the jail stairs into the street. 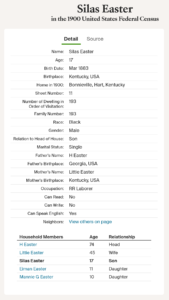 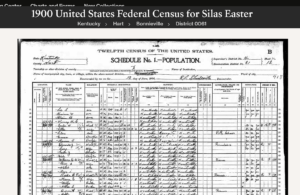 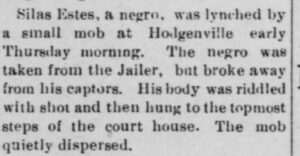 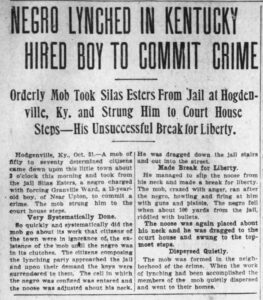 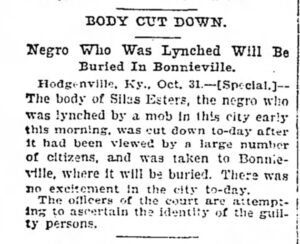