Please click on the following articles for more information:

Jimbo Fields and Clarence Garnett were African American teenagers who were born in Shelbyville, Kentucky. As their ages vary in different newspapers, Fields was estimated at sixteen years and Garnett of eighteen years at the time of the lynchings. As teenagers Fields and Garnett worked as day laborers, doing miscellaneous work for varying local businesses.

According to the 1900 census, both teenagers lived with their parents and siblings. The families lived next door to each other. Garnett lived with his mother Annie, and was the middle child. His sister Malinda was two years older, and his sister Emma was four years younger.   The historical trail for Fields is unclear, since the census indicated that a Fields family of five children led by Ann Fields as head of household. Also in the family were five children of Anne: George (21), Richard (17), Edward (15), Claude (9), and Willie (7 1.2). “Jimbo” may have been a nickname for Richard or Edward, since both were about the . The teenagers have been listed on findagrave.com as “lynched” under the names Clarence Garnett and Jumbo Fields.

The story across varying Kentucky newspapers is that William C. Hart was a journeyman printer who traveled from Lebanon, Ohio to temporary work at the Shelby Sentinel. Described as a binge drinker, Hart stumbled into Field’s home and began arguing with Anna Fields, Jimbo’s mom on the night of September 21, 1901. When Jimbo Fields walked in and saw Hart verbally abusing his mother, he went next door to retrieve Clarence Garnett. Fields and Garnett went back into the house to persuade Hart to exit. It is alleged that Hart was stoned to death, as fractures to his skull were revealed. The body was found nearby outside Jimbo’s mother’s house. They were arrested in the middle of the night and taken to Shelby County Jail. The mob worked quietly to demand the keys, however, the guard refused to give them up. They battered the doors down and grabbed Fields and Garnett before they realized what had happened. Escaping the jail, the mob hung their bodies over the Chesapeake and Ohio Railway Trestle, approximately 500 yards from the county jail. These bodies were left hanging on a railroad bridge after daylight and viewed by hundreds. The usual coroner’s verdict is predicted, however; Jimbo Fields and Clarence Garnett will be remembered.

The lives of Fields and Garnett, in addition to three other victims, have been memorialized by a historical marker in Shelbyville, Kentucky.  The marker briefly explains the lives the men led and the circumstances of the lynchings. 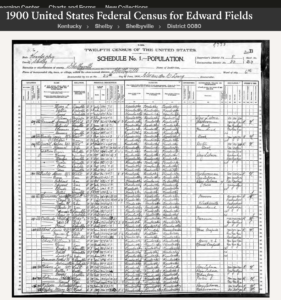 1900 Census for Garnett and Fields 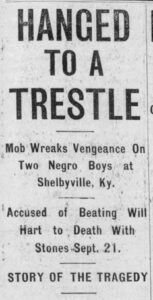 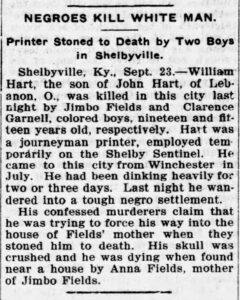 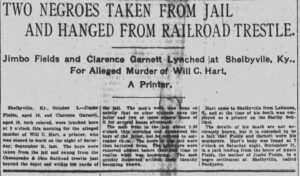