According to the 1880 U.S. Census, James Stone, an African American man, was born in 1875 to Henry Stone and Azora Stone. Henry Stone was born around 1830 in Tennessee, and it is likely that he was formerly enslaved. Azora was born in 1850 in Kentucky, and she also was likely formerly enslaved. In 1880, Henry Stone worked as farm hand and Azora Stone managed the house.  All the children were born in Kentucky after the end of the Civil War. James had three brothers and one sister, and he was the middle sibling of the family. The family lived in Mayfield, Graves County, KY, close to the Tennessee border.

On November 23, 1896, James Stone was arrested for the assault of Mrs. J.M.R. Green, a young married woman, and a mob had started to build as he was being taken to jail.

In relating their reports of the lynching of James Stone, several newspapers used racially stereotypical language and presupposed Stone’s guilt.  The Hopkinsville Kentuckian, on November 27, 1896, described the alleged assault in gruesome detail, calling Stone a “rapist and ex-convict” and a “brute.”  The newspaper also talked about the case as if there was proof that James Stone was known to have assaulted Green, despite there being no evidence to connect the two. Another newspaper called Stone a “depraved Negro.”

The Louisville Courier-Journal recorded Stone’s account of events. Stone was 21 at the alleged assault and claimed to be working for James Richard as a tobacco stripper. Stone said that he worked for Richard all day, walked home, and slept throughout the night. The next morning, he returned to Richard’s property, when the local sheriff of Graves County, Sheriff Cook, and another gentleman showed up and placed him under arrest. James Stone claimed to not know Green, and Green told the sheriff that Stone did not assault her.  She added that the man who assaulted her was shorter and that he was “yellow.” Despite Green’s statement, Sheriff Cook arrested Stone, further enraging the mob forming outside the jail.

For Stone’s safety law enforcement moved Stone out of the jail in Maysville, putting him on a train headed toward Paducah and concluding in Louisville. Sheriff Cook stood in front of the door to Stone’s car, threatening to shoot any man who entered the car. Still, the mob followed them to Paducah. In response, law enforcement moved Stone out of Paducah as fast as possible, getting him to Louisville within the same day. Stone’s next court date was scheduled for February 1897.

The Louisville Courier-Journal claimed that the Sheriff had said that the excitement had abated enough to permit returning Stone to the Mayfield jail, and Stone was returned to Mayfield on December 19th, 1896.  According to the Richmond Kentucky Climax, “Stone would certainly be lynched before morning.”

On December 20, a mob kidnapped Stone from his cell at approximately 12:45am.  His body was cut down from a tree at 9am later that morning.  The Maysville Public Ledger reported that the killing of Stone was part of a larger terror campaign. The paper reported that African Americans in the town were upset because Stone’s body had been used as a warning to all blacks to get out of town. Stone’s body was missing a finger and a toe. The mob had burned down the house of Thomas Chambers, killing him as well, and the mob set fire to the wholesale beer house owned by B.F. Boaz. 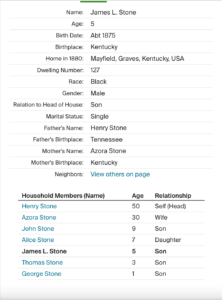 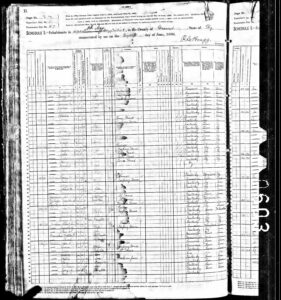 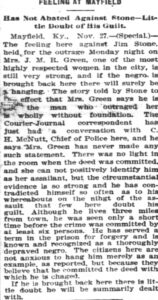 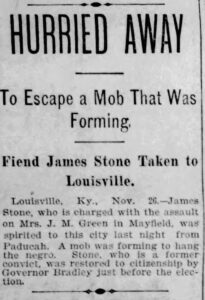 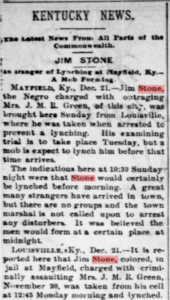