Click HERE for more information on the remembrance for John Maxey and Marshall Boston, held in 2019, 125 years after the lynching.

Marshall Boston was likely born around 1863, as a census from 1870 shows him as about 7 years old. The timing of his birth coincided with the later years of the civil war, meaning Marshall Boston likely grew up as a free black man in a free black family. There is not much known about Marshall Boston, but he was born to an unknown man and Mary Boston, along with two other children, a Wm Boston and Charles Boston. Their home in 1870 was in Orangeburg, Mason, KY. In 1884, Marshall Boston was accused of and imprisoned for rape and sent to prison for 10 years. The Maysville Daily Bulletin asserts that Boston’s case was overturned on appeal by the Kentucky Court of Appeals.

Marshall Boston’s case provides an additional example of the bias that white newspapers had against black victims of lynchings.  The Frankfort Roundabout referred to Boston as a “negro rapist who paid the penalty of his crime.” The Owensboro Bulletin referred to Boston as a “black brute” whom the mob “quietly removed from the jail” to meet his fate. There is no evidence verifying the above details.

Boston, in the summer of 1894, was accused of raping Mrs. Martin Nolan, a woman who lived close to the state capitol. Mrs. Nolan was supposedly heading towards the city to do some marketing, and on her way home, she was attacked by a black man. She claimed that the man demanded money from her, grabbed her, dragged her into a ravine, and choked and raped her. Mrs. Nolan then ran home and told a neighbor what had happened, providing a description. As the searching party was out for the person responsible, Judge B.G. Williams saw Marshall Boston standing on a street corner, with scratches upon his hands that fit the description Mrs. Nolan had given out. Marshall Boston supposedly didn’t “tell a very straight story of his whereabouts during the forenoon” (1894). He was placed in a vehicle under guard and driven out to the Nolan’s home, where Mrs. Nolan immediately identified him, and Boston was jailed.

Boston supposedly had green burs on his clothes, similar to those on Mrs. Nolan’s clothing. This circumstantial evidence led to the gathering of a mob in the early evening of August 15, 1894. According to reports, the police tried disperse the crowd, but the crowd grew insatiable and attacked. Supposedly, a crowd numbering several hundred ran to the court house, and overpowered the sheriff, gaining possession of his keys. But they weren’t able to get all the way into the jail, because they needed a second set of keys to open the inner doors, so the mob grabbed sledges and crowbars to break the doors down. The mob brought Boston from his cell, strung him up on one of the overhead cross beams, and killed him. One article claimed there were about one hundred shots fired into his body after his death. The Frankfort Roundabout, a white newspaper from the area of the incident, writes in September 1894, a month after Boston’s murder, about the Kentucky Supreme Court looking at Boston’s case and investigating further into it.  There is no evidence of an investigation of the mob breaking into Boston’s jail cell. 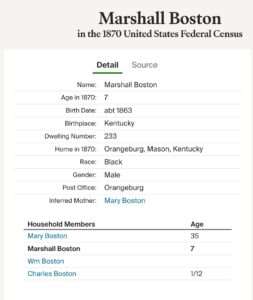 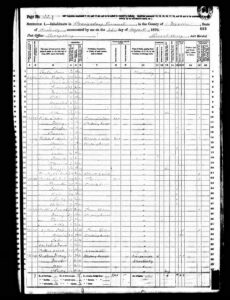 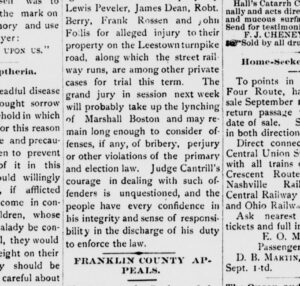 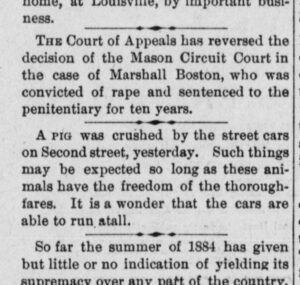