Will Skaggs was born in approximately 1875 to Margarett and Levi Skaggs in Rich Pond, Warren County, Kentucky.  Will was their only child. The 1880 census indicates that he was 5 years old in 1880. An article from the Nashville Tennessean mentions Will’s father as John Skaggs, but no such man has been found. The best census data indicates that Will was born to Margarett and Levi. It is unknown if he went to school or had any sort of occupation from the census data found.

Skaggs crime is the attempted murder of one young man who’s only given name was Kirby in the neighboring Allen county. After an altercation, it’s alleged that Skaggs took out a pocket knife and slashed the throat of Kirby, “probably fatally wounding him”, according to the Ohio county News. The Ohio County News then goes on to count how Will fled the scene of the crime back to his family’s home. Fearing mob violence, Skaggs fled to a cabin, owned by Boyd Johnson away from the home of his family.

Early in the morning of April 16, 1891 Skaggs was awakened to the “pounding at the door” from a collection of masked men. The mob had previously gone to John Skaggs and gotten Will’s location from John because according to the Nashville Tennessean, John did not know what Will had allegedly done. Skaggs attempted to flee out the back door of the cabin but was quickly apprehended by the mob where they shot him where he stood five times, according to the Ohio County News. The masked men then mounted up on their horses and each went their separate ways. No one knows any members of the mob but they were assumed to be white by the Ohio County News and to be friends of the slayed Kirby. According the OCN, not a single word was uttered by the mob during the lynching of Will Skaggs. Will Skaggs did not even have the opportunity to be arrested or tried, they simply found him and killed him. This story was later picked up by the Kansas City times and the Anaconda Standard out of Montana. 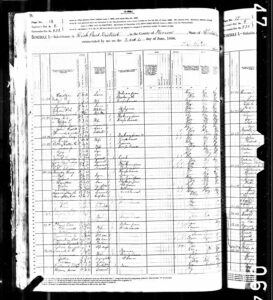 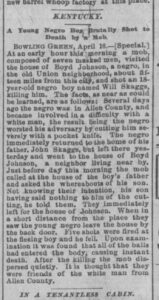 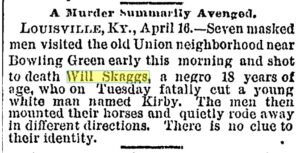 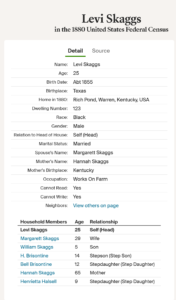