Tom Weaver was an African American man born in Kentucky in January 1868. He moved around adjacent counties, and according to the 1900 Census, he resided in Herndon, Christian County as a boarder of the Blair family. He was a farm laborer who gathered tobacco and other crops. He did not marry and had no known family members, and thus his more mobile lifestyle was made possible.

In 1908, he was working as a packer in a prizing house for a tobacco association in Canton, Trigg County. In the village of Golden Pond on March 24, Weaver was pulled from his bed by a large band of Night Riders. They whipped him, then set him in the road at distance from themselves and demanded that Weaver begin running. When the 40 year old hesitated, they began shooting at him. Weaver was hit in the shoulder and the hip, and left dying on the road, where he was found by neighbors in the morning, still alive and able to tell his story.

Weaver was taken to his father (not mentioned in the Census) in Canton, where he died three weeks later from his wounds. He died on April 9th, 1908. 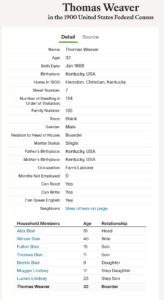 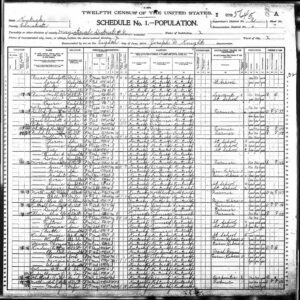 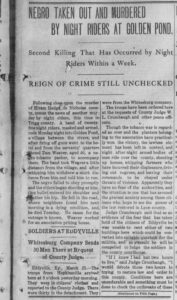 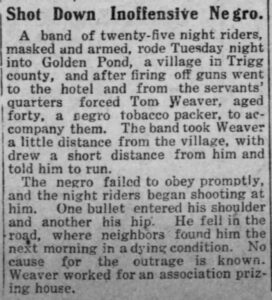 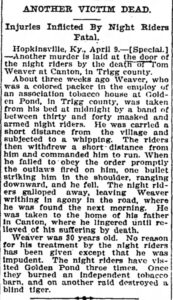