While not much is known about Raymond Bushrod’s early years, it is worth noting that Bushrod spent significant amounts of time in Indiana, not Kentucky. According to the 1880 census, Raymond Bushrod’s parents were Horace and Nina Bushrod.  Raymond had three siblings,  Susan and Horace Jr who were older, and Charles who was younger. Horace Bushrod Sr. worked as a farm hand and his Nina Bushrod was a housekeeper.

Raymond Bushrod has his life tragically cut short by a mob of around 800 people in Hawesville Kentucky on September 26th 1897. Bushrod was accused of rape and this time, the alleged victim was Maggie Roberts, the daughter of a prominent white farmer in the area.

Bushrod was being held at the county jail. Due to fears of a possible lynching, the local Sheriff attempted to have Bushrod removed from the area. The mob intercepted the sheriff deputies escorting Bushrod and took him. White newspapers at the time condoned the lynching by referring to the ordeal as “Judge Lynch” and describing the altercation as an orderly affair, calling their objectivity into account.  The Breckenridge News reported that Bushrod  had been given an opportunity to publicly pray and repent of his crimes. During this time, multiple popular newspapers report that Bushrod confessed to the crime at which time he was strung up and hung from a tree in the town square. All of the accounts dehumanize Bushrod and make him seem to be a villain when in reality, he was denied his rights and a fair trial. Most Kentucky newspapers were written by white men at the time, and this contributed to the inaccurate reporting behind Bushrod’s demise.

Raymond Bushrod was the victim of a hate fueled; racist mob who tragically cut his young life short. While Census records on Raymond Bushrod are not confirmed, we know that he spent significant time in Indiana and even what his parents did. Raymond Bushrod will forever be remembered for his altruistic martyr. 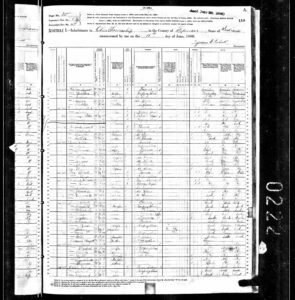 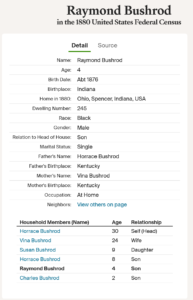