The family of William Butcher appears in the 1880s U.S. Census. Butcher’s mother and father were African Americans born in Tennessee around 1860.  They were likely enslaved. In the 1880 Census, John Butcher, William’s father, was listed as a 25-year-old farmworker and Alice Butcher, William’s mother, was a 21-year-old housekeeper.  William Butcher was their only child.  William Butcher was born in about 1878 in Tennessee, but his family had moved to Fulton, Kentucky. There is no census biographical data available beyond this information.

The circumstances of the lynching of William Butcher began on September 1, 1895.  In the early evening of September 1, the local marshall from Hickman, KY was supposedly on his way home from dinner and saw Butcher cursing and threatening to “kill at sight” the men who had caused him trouble the night before.  The Louisville Courier-Journal, a white newspaper, stated that the marshall told Butcher to go home or he would be arrested.  The marshall said that Butcher picked up a brick and started running toward him.  The marshall hit Butcher over the head with his walking cane, knocking him to the ground. The same article claims that after this, Butcher got to his feet and began to run away, yet still throwing bricks as he fled. One of the bricks hit W. T. Buckner, a white man, and the marshall, knocking him down. Butcher was caught and locked up in the city jail.

The jail was supposedly found empty the next morning, with the bar of iron used to break the lock found just outside the door. The dead body of William Butcher was found on the rocks of a river nearby.  In one account, his head and face were full of buckshot, 24 bullets in his back and hips, and 21 pistol balls in his arms, legs, and head. He was barefoot and his feet were cut up by the rocks he walked upon, and was lying in a way that indicated he had escaped his captors and was shot as he ran. Other accounts reported that his head had been blown off by the shotgun blast. Nine white masks were found near the body, and local witnesses said that several of the men fled the scene on horses.

The Kentucky grand jury investigated this case, but there were no indictments or follow-up.  The Courier-Journal’s biased account of the incident characterized  Butcher as a “disorderly negro,” claiming that Butcher’s fate had been sealed by his supposed criminality as a “drinking, crap-shooting loafer.” The newspaper did not verify the marshall’s account. The African American Washington Bee newspaper offered a brief description of the lynching without the racial language. Yet, the Courier-Journal also admitted in its September 5 issue that the “murderers ought to be hanged [but] they will not even be apprehended.” 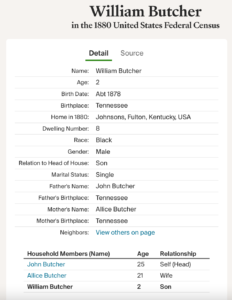 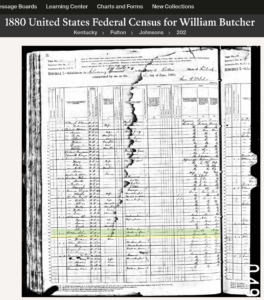 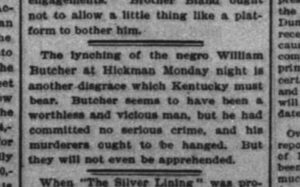 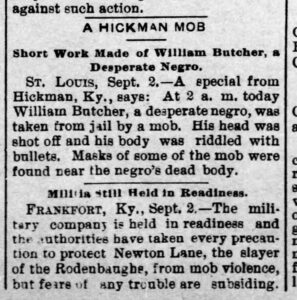 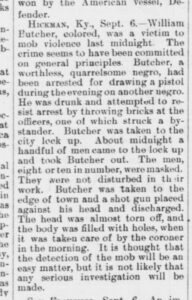