Robert L. Morton was a 21 year old Black man who lived until February 1897. He was born in Pilot Knob, Simpson, Kentucky, approximately 12 miles away from Rockfield. His occupation was unknown. The 1880 Federal Census has no record of Robert Morton’s mother or father. He lived with his grandparents, Isom Morton and Marian Morton. Isom was a farmer who could not read or write, and since being born in 1830, it was safe to say he was a former slave. The only record found of Robert Morton was in the 1880 Federal Census, where he was 5 years old.

Robert Morton’s story was that he was accused of writing an insulting or “insinuating” letter to Miss Tommie Johnson of Rockfield, Kentucky. There are no accounts of the wording or intent of the actual letter. BUt all news publications use either the terms insulting or insinuating. There is also no information on whether or not the two individuals had any sort of relationship, friendly or otherwise.  After the letter is found out by other members of the town, Morton is arrested and taken to a house to be put under guard until he can be taken to jail. It isn’t exactly clear why he wasn’t taken directly to jail, but given how little clarification there is in this case, it is likely the mob that lynched him wanted an easier way to get to him, as opposed to taking him out of his jail cell. It is said that at midnight a mob came to the house he was held at and overpowered the guard, took him three miles out, and hung him from a tree. This is the story repeated in many newspapers, many with the same exact story reprinted word for word. However, there is an odd account in other newspapers that are completely contradictory. In the Twice-a-week messenger, based out of Owensboro Kentucky, it states that Robert Morton was in fact not lynched, he was taken from his home and severely whipped. He then fled the country fearing more serious punishment. This newspaper tells a strange story, because many of the other newspapers report Morton’s body being cut down from the tree it was hung from. This article is not widely accepted, and it is still understood Robert Morton was in fact lynched. Robert Morton’s story has been featured on a segment in 60 Minutes by Oprah, while covering the opening of the National Memorial for Peace and Justice in Montgomery, Alabama. His name is featured along side other “vague” reasonings for lynching victims. 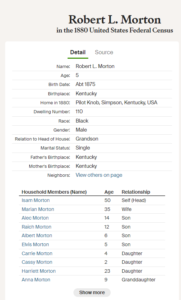 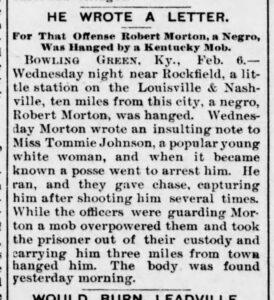 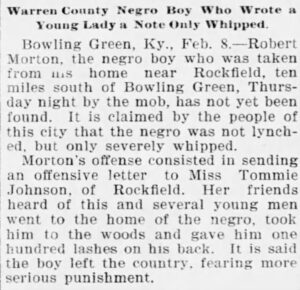